The most popular blogs I have written over the past six years are travel blogs in Malaysia. About Penang, Langkawi, Kuala Lumpur, and travel by plane, train bus and car.

The blogs are ordered in the number of views, from the highest down. The top 14. These statistics are from my original Tropicalexpat blog. I have also updated and published some on my new Tropicalexpat site:

From Penang to Singapore by train

Langkawi – some observations from my latest visit. And could I retire here?

And over the past 12 months – travel blogs in Malaysia again:

Road Trip – Penang to the east coast of Malaysia by car

So again – travel blogs in Malaysia. The past 12 months is similar to the longer term trend. But recently there is also more interest in Pangkor Island and the Perhentian Islands. 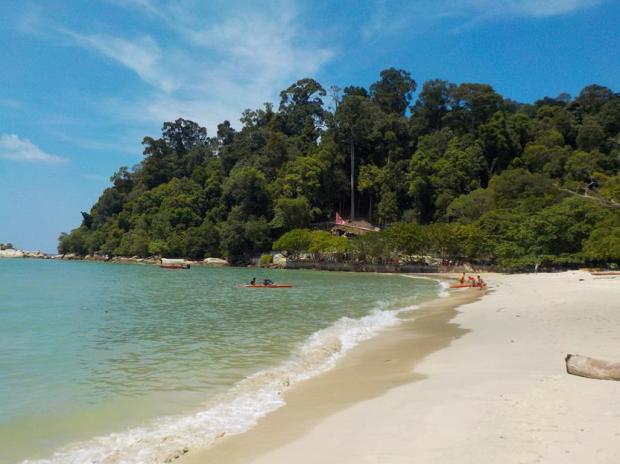 one of the beaches on Pangkor Island

If you are in Penang, Langkawi is kind of north, and Pangkor Island kind of south.  So as far as the weather goes – rainy season or not – they have the same pattern.

In theory Langkawi is quicker to get to, but in practice they seem to take a similar time to reach.

If you were to choose one to visit, which would it be? So here are what I consider the good and bad points of both.

As for the bad points:

As for the bad points:

You can have an enjoyable holiday on either – or if you have time – both.

I’ve been writing this blog for three years this month, and have accumulated many partially written blogs that remain unpublished. I may as well just publish them as is, and if I ever feel inspired to finish any, do so later.

I really should finish this particular blog sometime.

Include round Malaysia trip last October, plus KL, Pankor Is, Penang, Langkawi, Perhentian

It’s easy enough to do a circle of Malaysia by car, but if you don’t go out to some islands you miss the best parts, which means you will have to either access the ports by public transportation, leave your rental car unused for your time on the island or in some cases fly there.

If you take your own car, then you have to return to it – you can’t leave it and catch a train further, without returning to pick up your car.  So mixed mode is difficult.

Sitting here right now gazing out at the grey skies and the drizzle, I am thinking of my favourite trips in Malaysia. And of what I have yet to do and see. I won’t bother with more photos as there are plenty in the links. After six years here this is what I think. 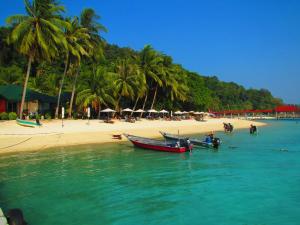 By far and away my favourite place is the Perhentian Islands.  The beaches are lovely, the sunsets can be stunning, and the snorkelling great.

Then comes Sabah – particularly a jungle tour to cruise the river and see proboscis monkeys.

After this, Langkawi, which we have visited many times.

Next would be a couple of nights in Malacca.  I don’t think there is so much to do or see, but the very centre is nice, and staying near the river is pleasant.

Then, a train trip – the quality of the rolling stock and service is very low, but it’s still fun, especially if it is the first time.  It could be the jungle line up to Khota Bharu from Gemas by day, or simply Penang to KL.

The next would probably be a few nights in KL – staying in a first class hotel.  First Class hotels in KL used to be very good value, but perhaps less so now.  Still, as long as you don’t really intend to get around by car much, as the traffic is terrible, based in a nice hotel near the monorail allows you see to a few fun things and eat some nice food.

Then the Bird Park in Butterworth – or in KL, which is bigger but I don’t like as much – to see hornbills.

I also quite like a couple of nights in Ipoh. There are a few things to see nearby,

And an early start from Ipoh to Pangkor Island allows you to spend the day there without spending a night – seeing as the hotels there are pretty bad.

Then there is Penang itself – Little India in George Town, Penang Hill – walking up is better than the funicular if you have the energy and start at dawn – before the heat, Spice Gardens…

A nice drive is also from Penang over to Kota Baru. I’ve done this by car and by bus.

And what I have yet to do – while I have circled Malaysia by train I haven’t by car – I want to see more of the east coast beaches.  Then there are a few east coast islands to see – Tioman Island etc.

What I had expected to be able to do, and can’t is to spend time in the jungle and to camp. Mosquitoes and other biting insects are the main problem, with heat and humidity secondary.  Locals think you are crazy if you want to camp, and they are right.  It is unlikely you’ll get malaria or dengue, but the more mosquito bites you get, the greater the chance.  So stay in hotels, wear long sleeves and trousers at dawn/dusk and where mosquitoes are – but generally, stay away from places where mosquitoes are.

I’ll report back when there is something to add to the list.

There are not many big things in Malaysia. Not like Australia with the Big Pineapple, the Big Chainsaw and many more. But here are a few in Langkawi. 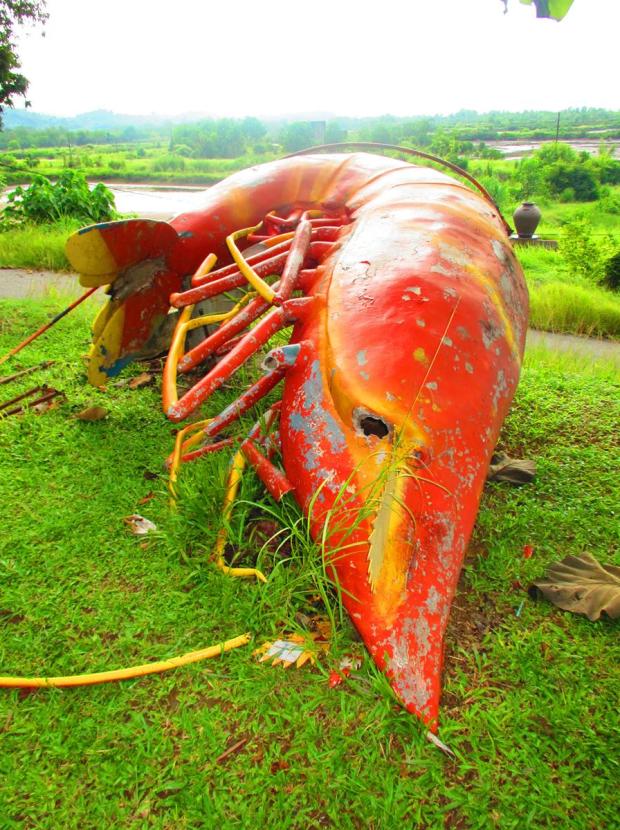 The Big Durian and Mangosteen 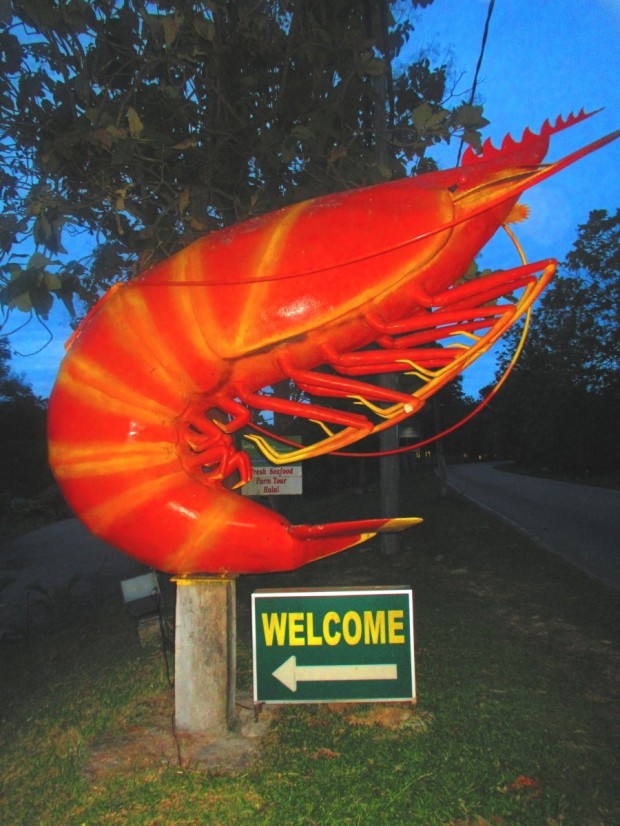 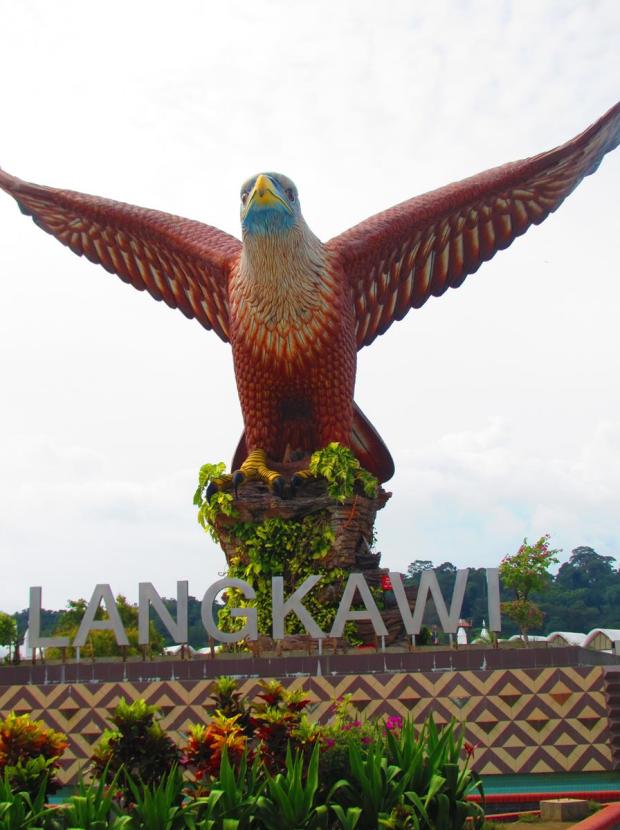 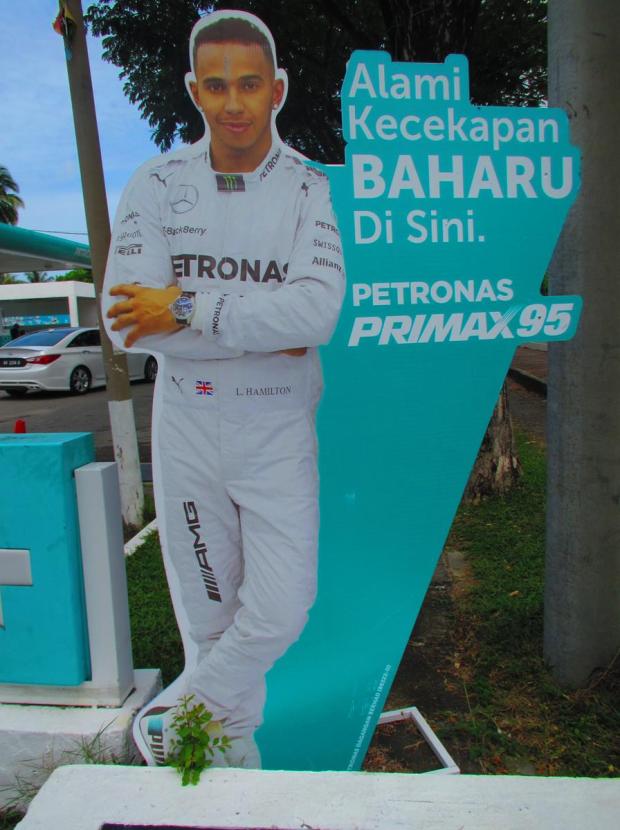 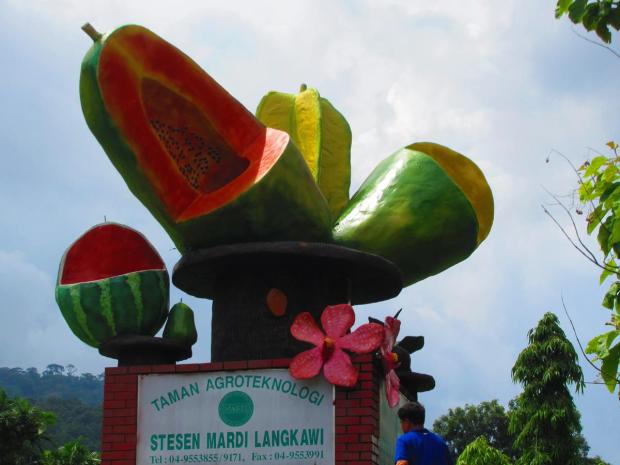 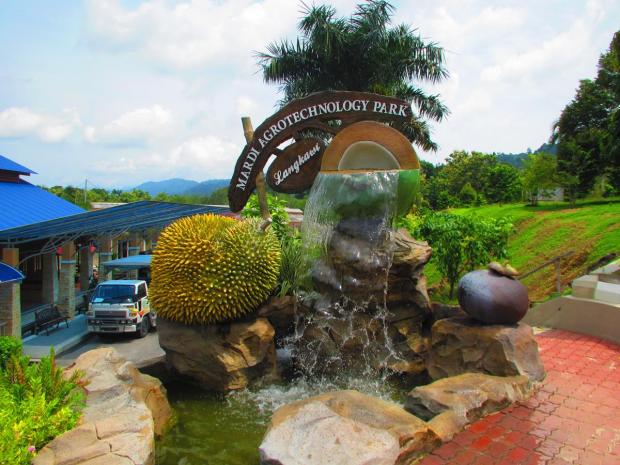 Over  the years we have flown to Langkawi, and driven to Kuala Perlis and then caught the ferry to Langkawi.  For our fourth trip there we decided to try the bus.  I have already blogged about the bus / ferry trip for this holiday, so I will take it from our disembarkation at the ferry terminal in Langkawi.

We arrived around 1.15PM, ignored most of the touts for rental cars and all of them for accommodation, but one tout seemed OK, so we went with him to his nearby office and rented a car from him.  This was a small orange Perodua Viva automatic – Mrs Tropical Expat’s requirement.  It was RM10 extra for the automatic, so it cost RM60 per day – 24 hours. The car was a bit battered but seemed OK for Langkawi. As usual I took multiple photos to attest to the dents already on the car. 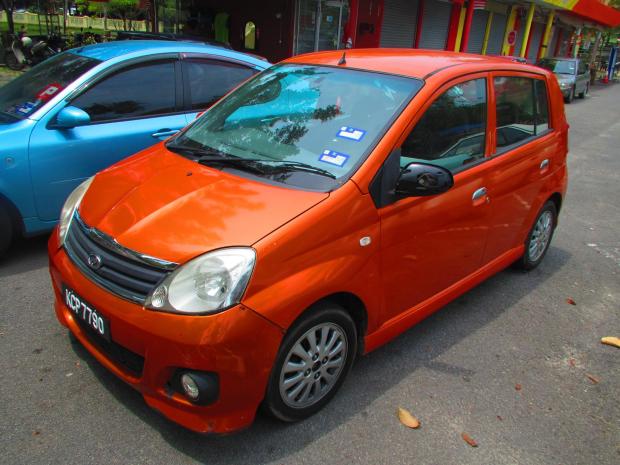 Viv the Perodua Viva – it looked OK, but turned out not to be

We struck out for the roughly half hour drive to Cenang, stopping off firstly to buy petrol as rental cars are always empty, and then stopping on the way again to see the Big Sea Cucumber Oil Bottle, and indeed buy some product. 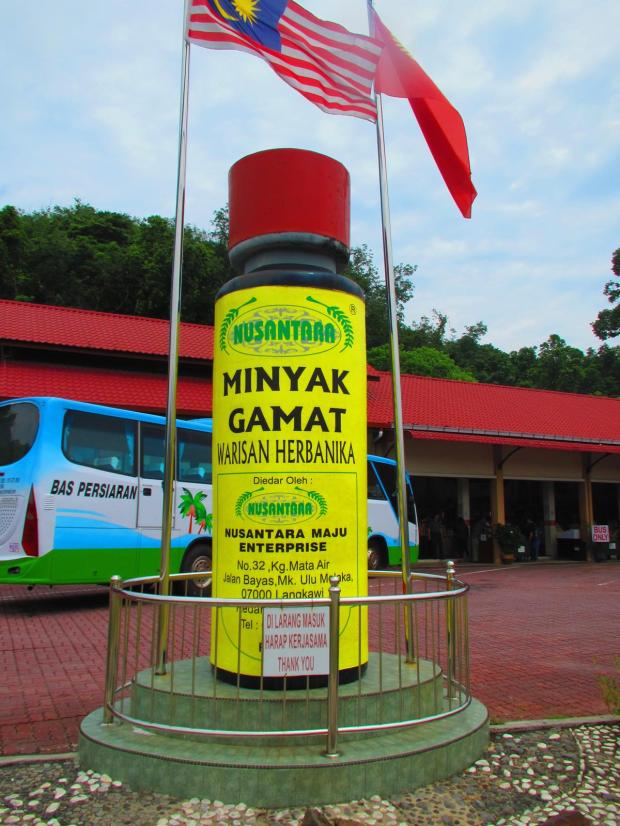 And we checked in to the NR Motel on the Pantai Tengah Road, actually staying in the same room we did last time.

And how did it work out?  Not as planned.

The two restaurants I was looking forward to patronising, on the Pantai Tengah road, closed a few months ago: the Lebanese (Mona) and the Mexican restaurants. Although they appeared still to be open when I checked on the Internet.  Mona will open in another location in a few months, I heard. But very disappointing.

So, the meals we had:

Day 2 breakfast: Leftover dinner from the night before. Coffee

Day 3 breakfast: Fruit and chicken from the night market and some coffee

Day 3 lunch: Not so hungry. So, chocolate.

Day 4 breakfast: Leftover food we still had and fruit from a local shop

Day 4 lunch: KFC – (it was very hot and it seemed the coolest place in Kuala Perlis while waiting for the bus)

The Mexican restaurant was nice, but expensive. One dish shared between two would have been sufficient.

on the road through Cenang 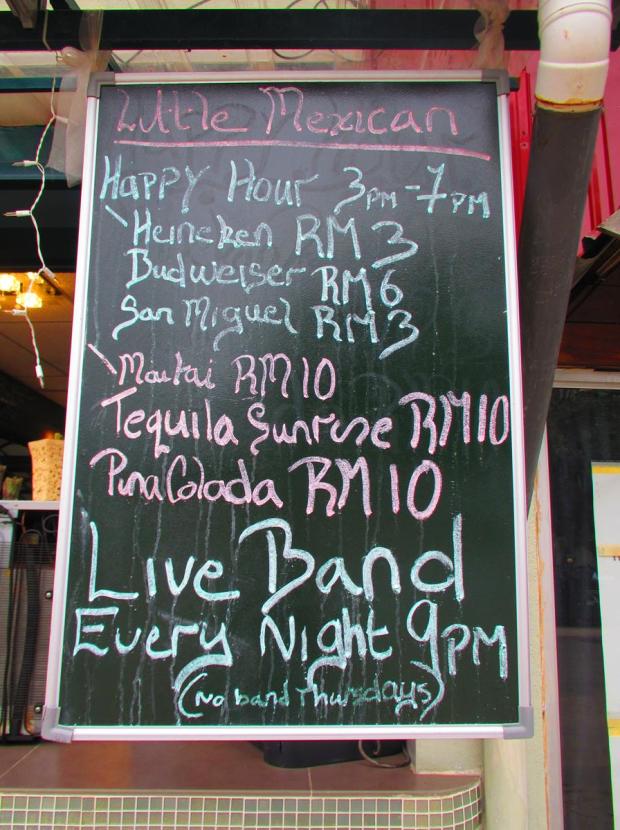 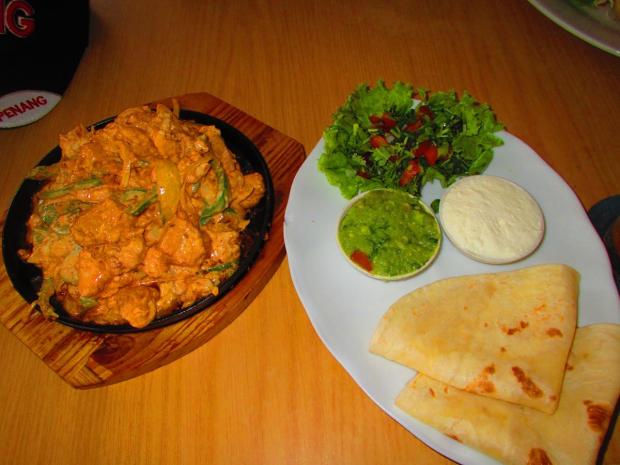 This was good, but cost over RM30

Scarborough Fish ‘n Chips was good as ever – I have previously written about it. 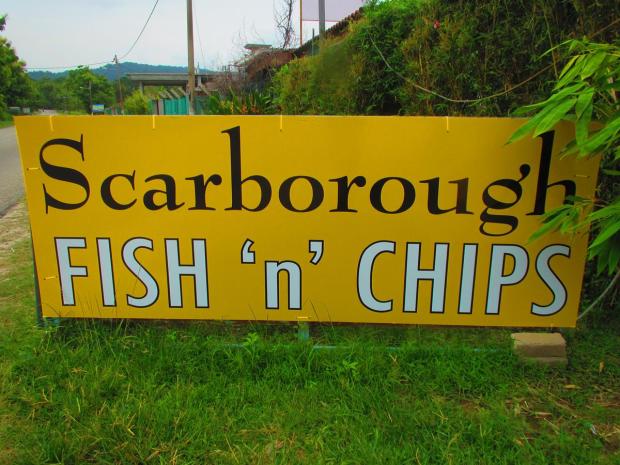 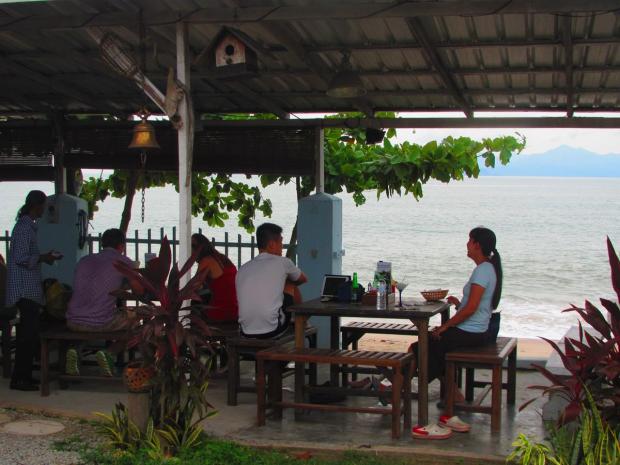 right next to the beach 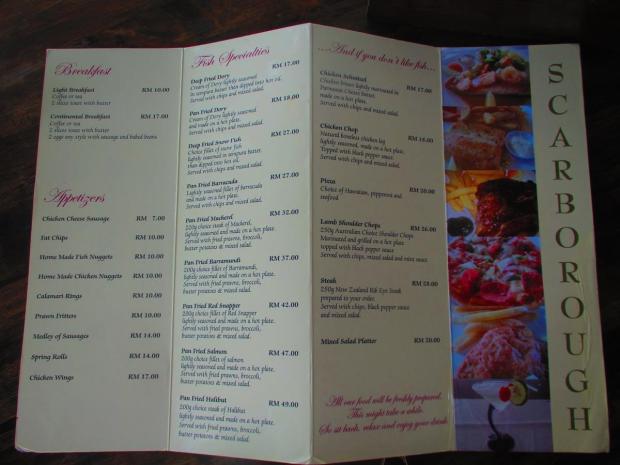 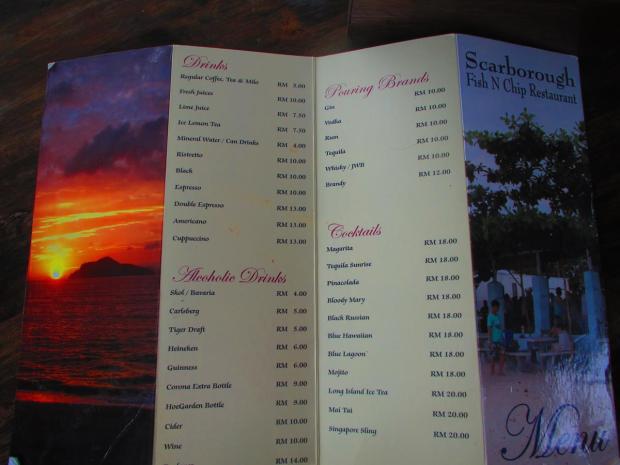 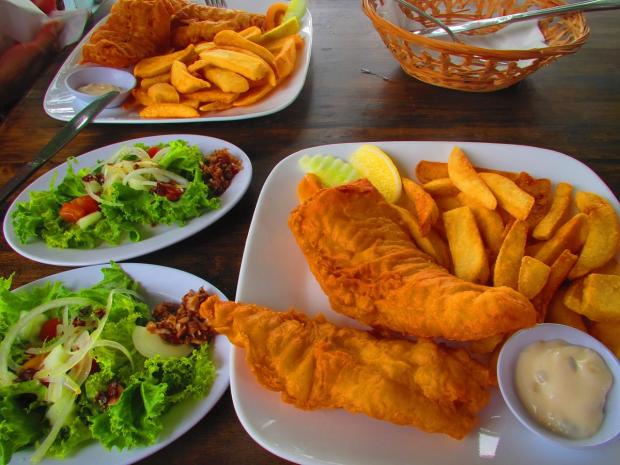 Serving was plentiful and it tasted good

There is a night market every night in some part of Langkawi.  They are marked on the tourist map.  These are useful for getting food to eat there, or take away. And it’s cheap there.  Go there earlyish and leave before dark as you don’t really want to be driving in the dark due to roaming black buffaloes. 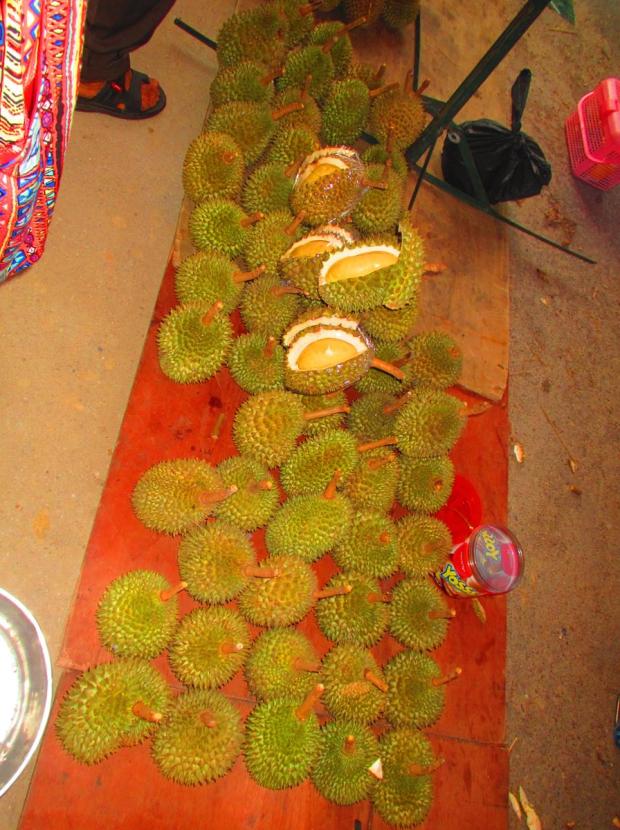 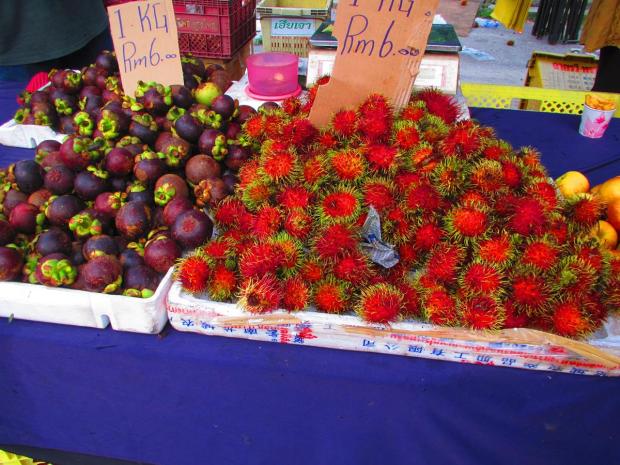 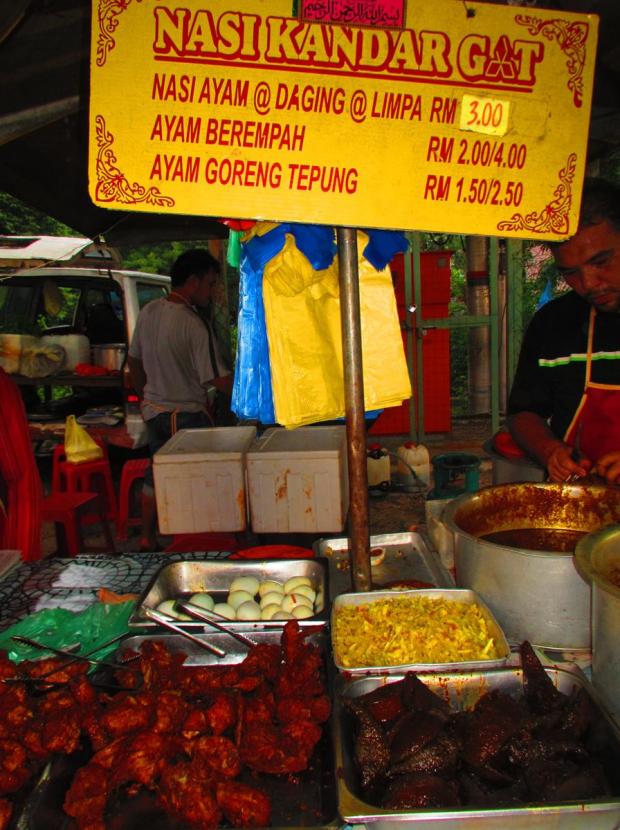 A piece of chicken (Ayam) for RM2 – and it was delicious

Istanbul Restaurant was overpriced and the food average. 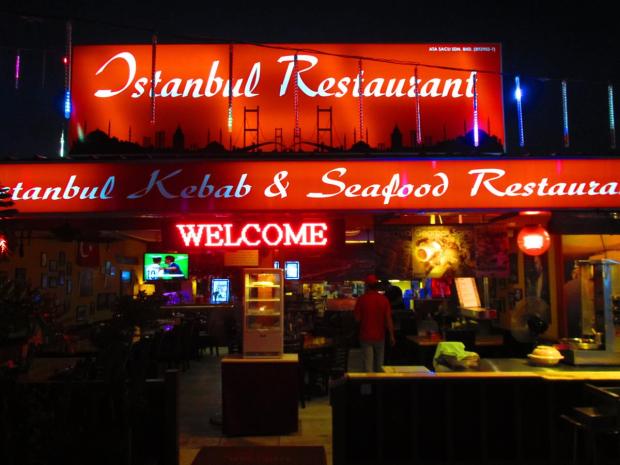 pricey, poor choice, small volume and average quality. Cost RM19 for a small chicken Kebab. In Berlin for the same price you get a kebab you can save half of for breakfast.

My latest formula for successful and economical eating in Langkawi.