Arriving at Butterworth by bus you’ll end your journey at Penang Sentral. Penang Sentral is a hub from which you can catch the train, bus or ferry.

Alternatively, arriving at Butterworth by bus, you can catch other buses to various parts of Malaysia from Penang Sentral. Finally, there is a ferry service four times an hour, across to Penang Island, a 15 minute journey.

Bangkok to Hua Hin by train: 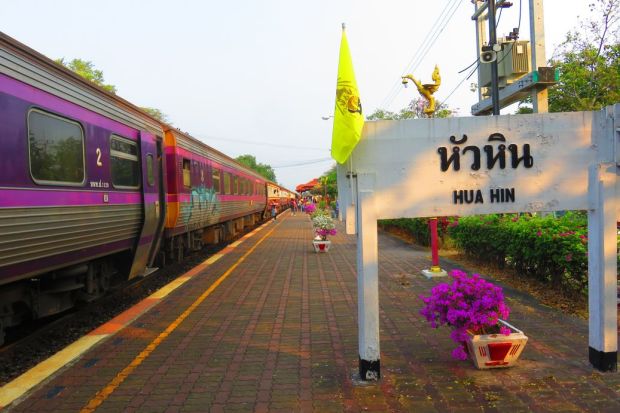 Bangkok to Hua Hin by train is around a four hour trip. But this depends on which train service you take, and whether the train is delayed.  You can go by bus, or by taxi in a little less time. For more details on trains see, as always, The Man in Seat 61.  This blog is more about the actual experience.  For a longer trip I just took, see The Train from Malaysia to Chiang Mai.

The train from Malaysia to Chiang Mai

The train from Malaysia to Chiang Mai is interesting and fun if you like trains. And a useful and safer way to travel if you want to make stops along the way.  And you’ll see some of the countryside, and have the experience. But if you don’t want that,  fly – if you’re flexible you can find cheap flights.

So you could make one or more stops or travel all the way to Bangkok in one go, and then take another train on to Chiang Mai. The latter is what I will describe here as in the past I have visited the below-mentioned.

Previously you could catch the train from Singapore to Bangkok on the one train. More recently it was Butterworth, Penang to Bangkok, but Malaysia has electrified the lines, while Thailand hasn’t.  So now one must change trains at the border of Thailand.

So the the train from KL and Penang to Chiang Mai is actually three trains. Train one to the border, train two to Bangkok and train three to Chiang Mai. For more photos and videos related to this trip, please see Part 2.

A digital nomad. Someone who earns a living on their laptop often working remotely, and often abroad.  So they are working in coffee shops, hotel rooms, public libraries, co-working spaces, or recreational vehicles.  It’s a lifestyle that offers freedom from many of the downsides of traditional working.  Downsides such as office hours, office politics, a boss, a dress code, and commuting. And the downsides of living in just one country. Control and surveillance-obsessed governments and the accompanying bureaucracy. Not to mention confiscatory taxes. If you don’t like particulate restrictions, you avoid countries that impose such restrictions. Instead there are many of the fascinations of travelling. And being easily able to vote with your feet when tired of one’s current location, for whatever reason.

The most popular blogs I have written over the past six years are travel blogs in Malaysia. About Penang, Langkawi, Kuala Lumpur, and travel by plane, train bus and car.

The blogs are ordered in the number of views, from the highest down. The top 14. These statistics are from my original Tropicalexpat blog. I have also updated and published some on my new Tropicalexpat site:

From Penang to Singapore by train

Langkawi – some observations from my latest visit. And could I retire here?

And over the past 12 months – travel blogs in Malaysia again:

Road Trip – Penang to the east coast of Malaysia by car

So again – travel blogs in Malaysia. The past 12 months is similar to the longer term trend. But recently there is also more interest in Pangkor Island and the Perhentian Islands. 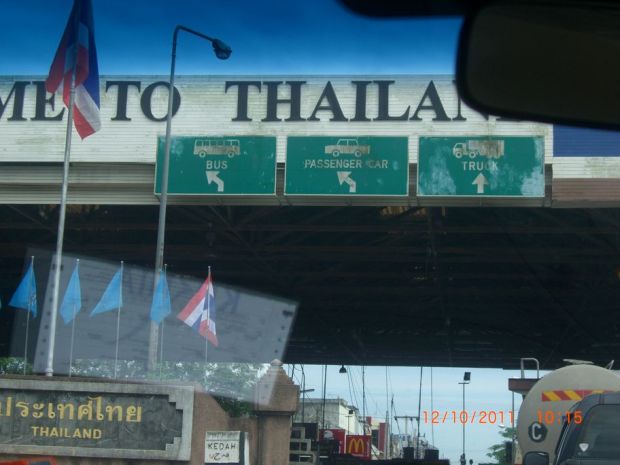 A friend often drives up to Thailand and has given me some details which may be useful for some readers, so I share them here.

He has used the Bukit Kayu Hitam crossing many times…

Fairly recently a big Ganesha has been erected outside of Bangkok, at Wat Saman Rattanaram.  See the size of it by Google Street view. It has proven so popular that other temples and statues have sprung up in the same area.  By private transport it would be a half day trip. We thought we’d try public transport, which meant we were away most of the day. 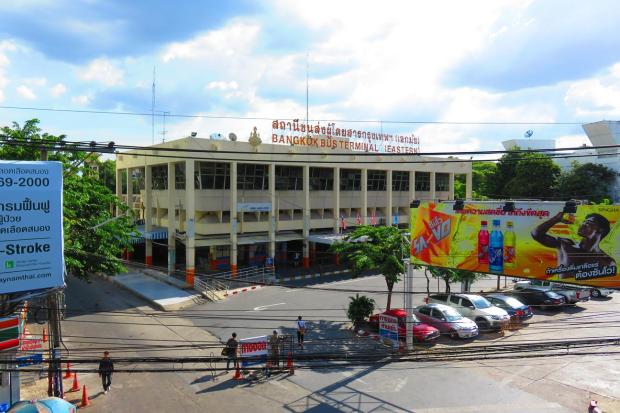 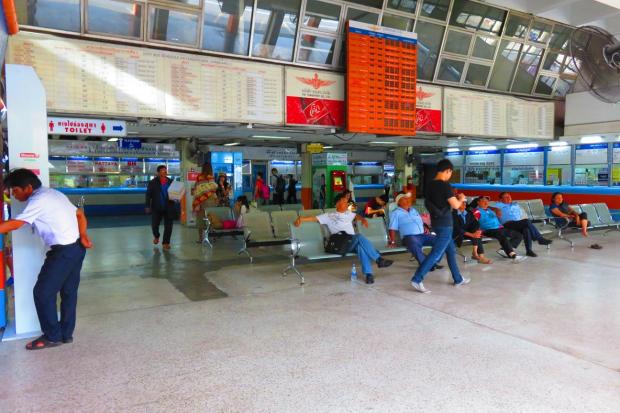 The mini-bus to Chachoengsao departs from Bangkok Bus Terminal (Eastern), on Sukumvit Road, opposite BTS Ekkamai Station. We caught the 8AM minibus, but there are three earlier departures, and the next is at 11.00.  However, check the day before, as timetables change frequently.  A ticket costs THB18, from memory. It took us about two hours to arrive at the Chachoengsao bus station.  We were there at 10.10AM.

the mini-bus to Chachoengsao 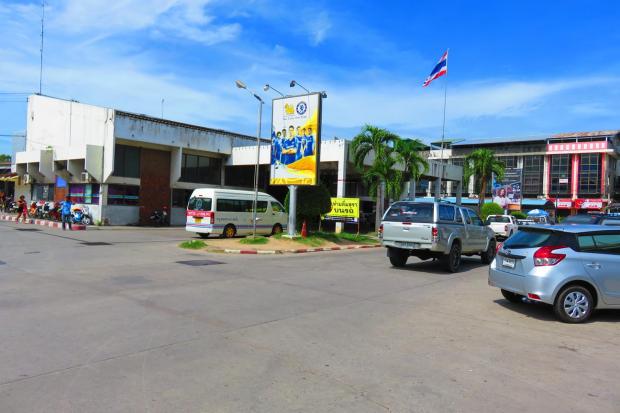 the bus terminal at Chachoengsao

The pickup to Wat Saman departs from a side street next to the market, about two minutes walk from the bus terminal. Our mini-bus driver showed us where.  We had to wait about 20 minutes for the next departure, at 10.30. The fare was THB30. 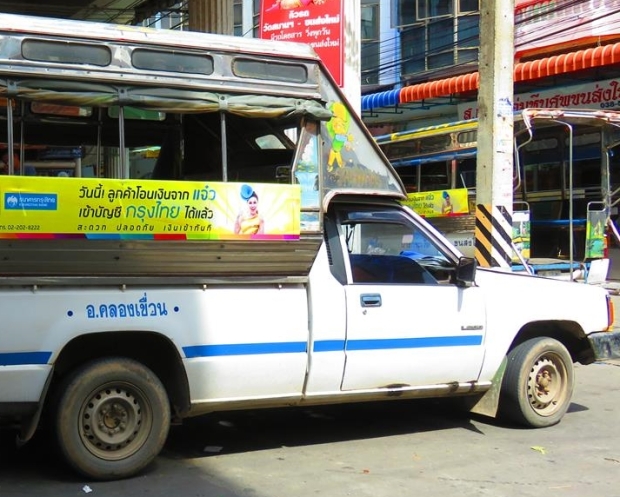 the pickup to Wat Saman 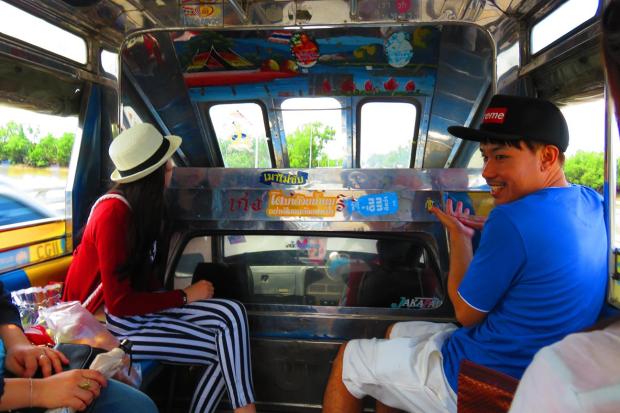 on the pickup on the way to Wat Saman 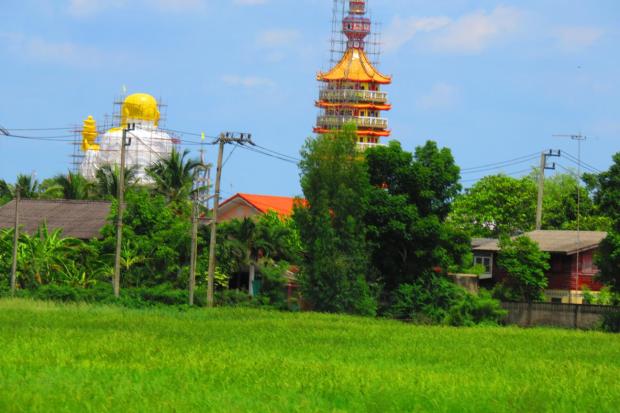 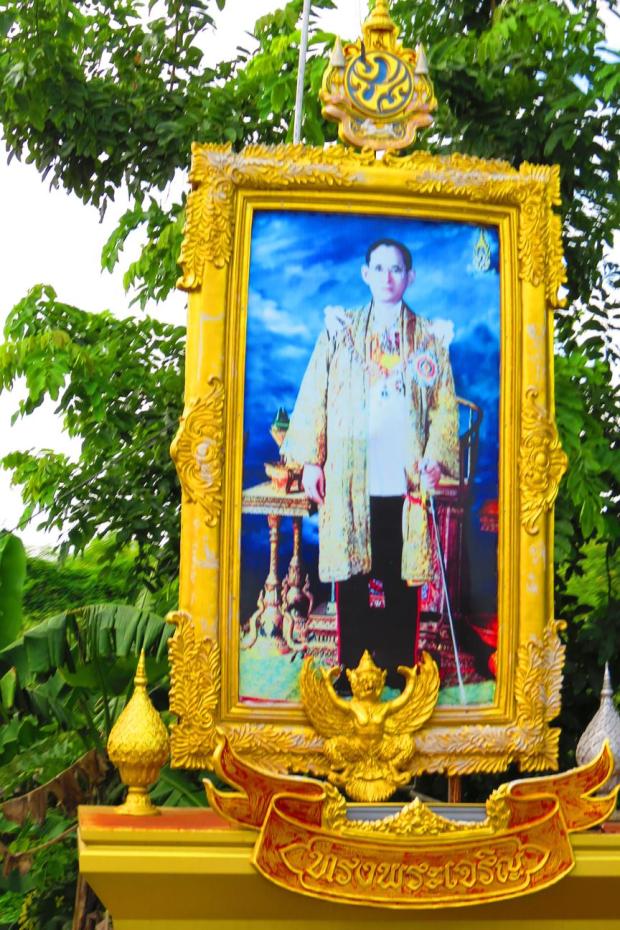 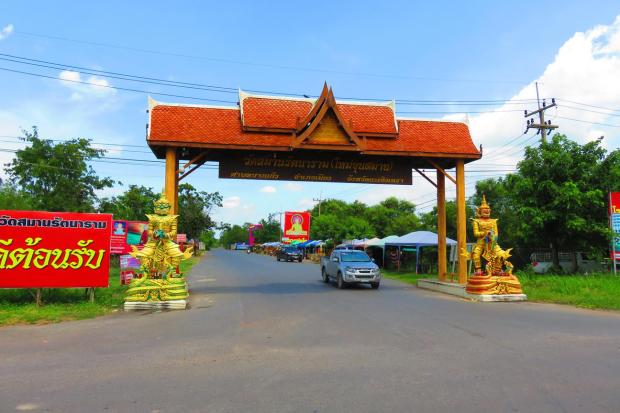 And then we arrived at Wat Saman at about 11.25AM.  It has no entry charge.

lots of stalls near the temples 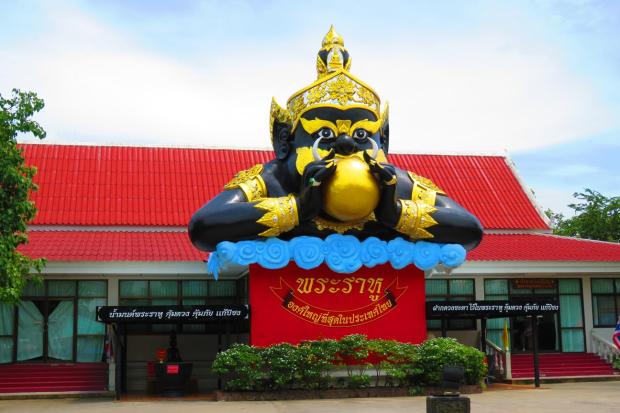 first time I’ve seen this one – the sign for the timetable for the pickup back is in front of this. 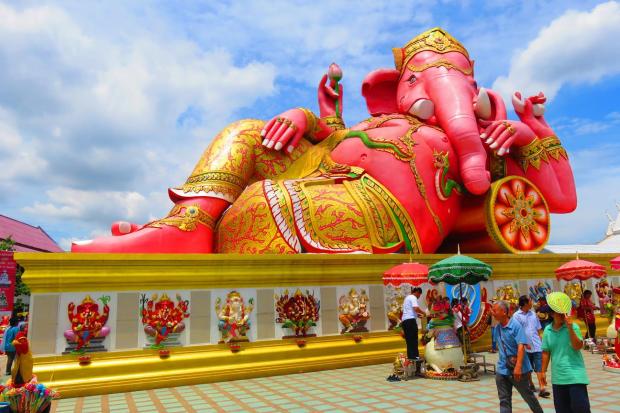 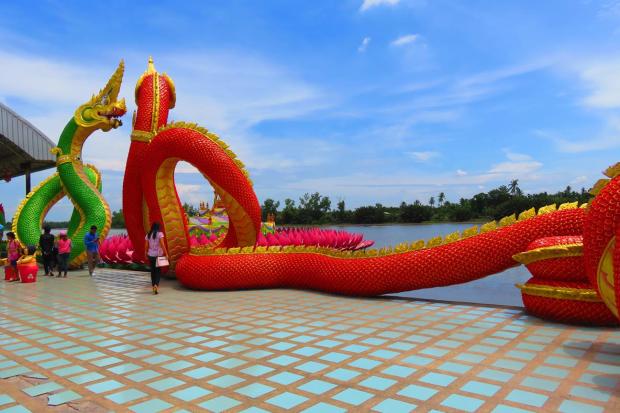 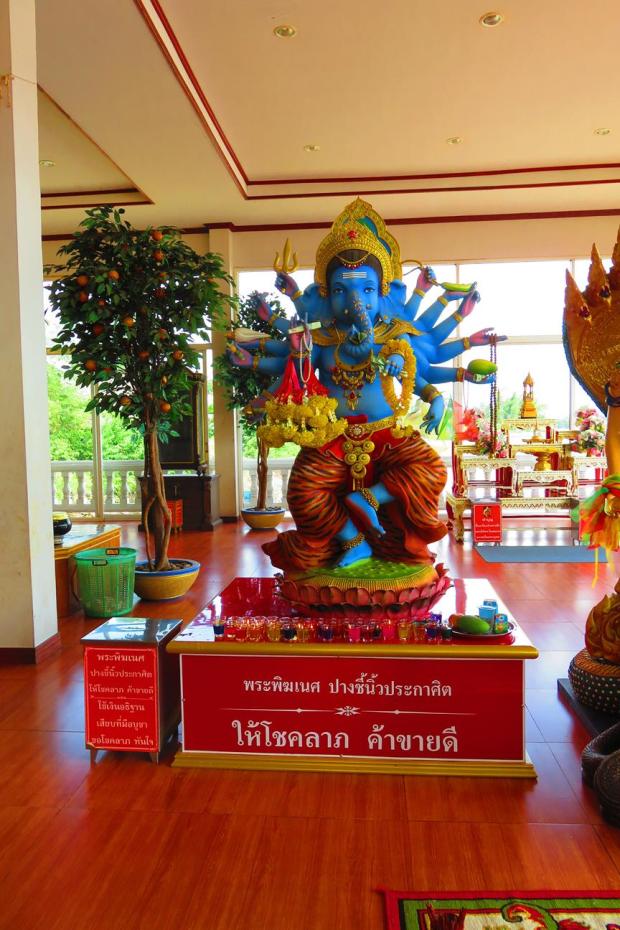 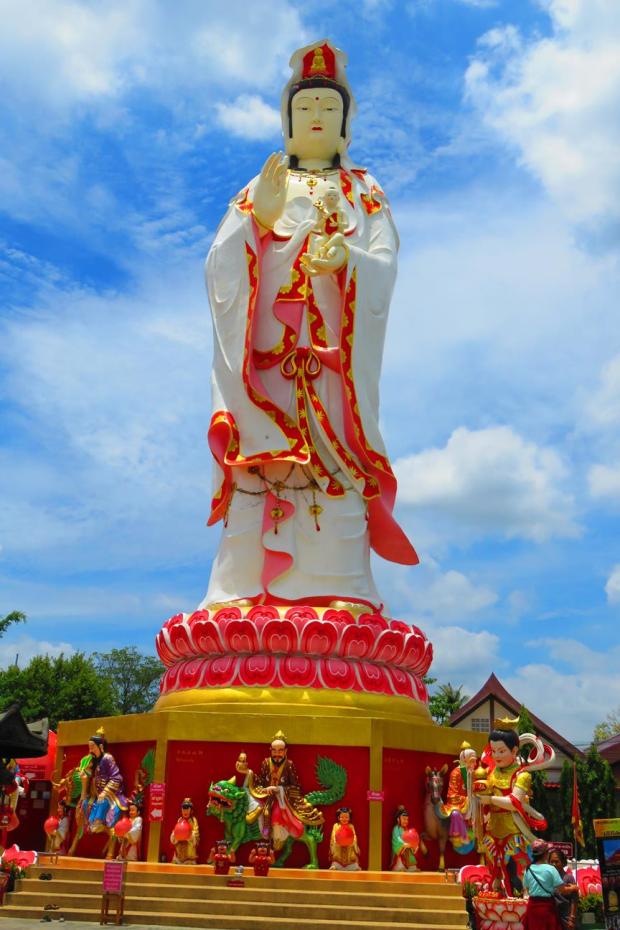 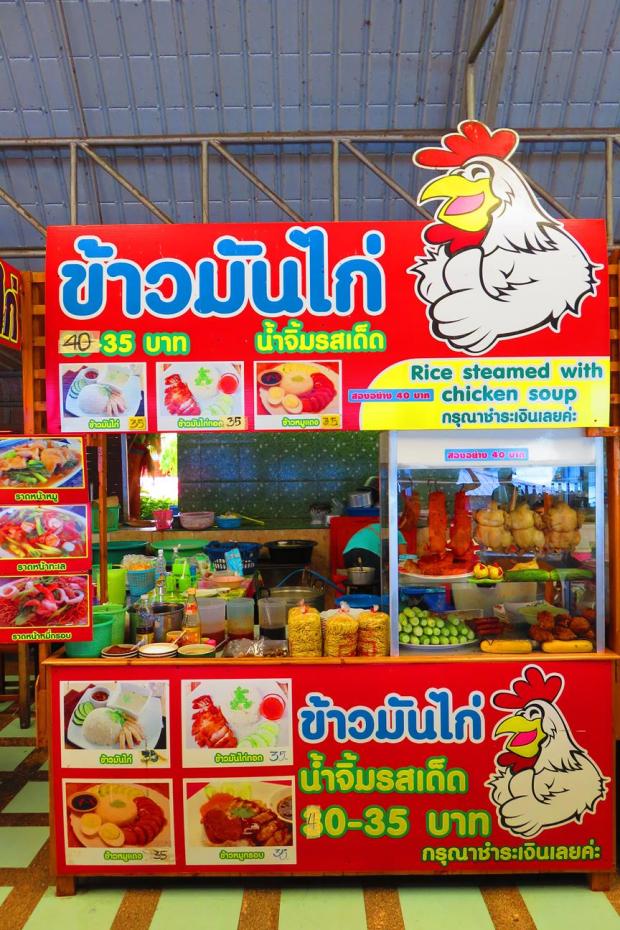 It was interesting to do once and to experience the ordinary public transport.  Bangkok traffic can be bad, so consider which day you make the trip. And take some water to drink,  as usual.

The hawker area serves food: food, quality, hygiene, volume and value all were quite satisfactory for a super touristy place.

If you became over heated you can escape to Amazon cafe which is the only air-con place in the Wat.  It is a couple of minutes walk past Ganesha.